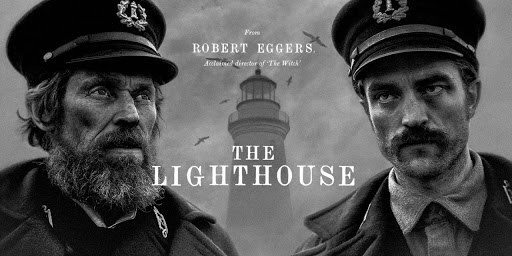 Horrific Hidden Meaning is a series that explores how horror movies can provide a platform of discussion for the uncomfortable realities within society and the human psyche.

Although not a full fledged horror film, cherrypicking ingredients of comedy, drama, fantasy and more, Robert Eggers’ The Lighthouse  builds itself on a rock of horror stacked with deeper meaning behind its esoteric, Greek mythos-inspired exterior. Egger’s first film, The Witch, dealt heavily with female adversity in the 1630’s, not far removed from the events of the Salem witch trials, that echoed eerily similar to our current world. As a thematic follow up, Eggers’ second outing delves deep into the trenches of the male psyche and explores the undignified darkness within.

Dropped into a sort of cinematic limbo set in the 1890’s, we find ourselves at an isolated lighthouse island where Ephraim Winslow (Robert Pattinson) and Thomas Wake (William Dafoe) have just arrive for a contract job. The older, experienced Wake barks and bellows orders at the younger Winslow, tasking him with all the dirty work like disposing the two men’s feces, stirring the oil and swabbing the floors. It quickly takes a toll. Winslow’s youthful reserved demeanor gets pushed to the brink.

Winslow can be any modern young man in a capitalist driven workforce. As long as he keeps his head down, works hard and earns his keep, he’ll someday enjoy the light at the top of the ladder. This light representing all the fortunes of becoming rich and successful. The power felt and the satisfaction earned from attaining The American Dream when the game is played just right. The inherit competition of such a dream, as explored through Winslow and Wake’s dynamic, can influence the alpha-male psyche in a seriously destructive manner.

Wake is an elderly, successful man who has achieved his goals and now, in his old age has earned the satisfaction of possessing the light all to himself. He gets to be the boss. And he enjoys the hell out of it, holding it over his underling and reminding him to know his place every chance he gets. This dynamic is demonstrated early on as Winslow painstakingly refuels the lighthouse. The camera pans up from Winslow in the dark bowels and rises up to Wake enjoying the blinding bright light in nude ecstasy. But unbeknownst to Winslow, we see an expression of discomfort in Wake while in that lantern room. His excessively orgasmic enjoyment of the burning brightness is taking some kind of toll on him, demonstrating the dissatisfaction felt by men who have invested their entire life to achieving a career or social status that the light represents, only to feel the emptiness that those excessive riches provide them. Winslow, much like any capitalism-driven young man, is attracted to the glamor at the top and the benefits that await, ignorant to the cost such a fixation can take on the soul.

Despite Wake’s grave warnings of the curse that comes with killing a seagull, Winslow snaps and takes his frustrations of subjugation out by smashing a particularly bothersome one to death. The second Winslow takes this step out of line from Wake’s overbearing rules and expresses anger, the camera pans up to reveal a harsh change in weather. The powers that be, mother nature herself, is not pleased. And as punishment, nature’s wrath shifts Winslow’s reality and the reality of the movie itself. From here on, whether we’re witnessing full-fledged delusion or not is anyone’s guess.

Winslow’s sin opens up the flood gates to his base conscious. The first manifestation of his torment arrives as a beached mermaid. His initial reaction is to lust over the beautiful creature. As he touches her breasts, the mermaid awakens and emits an agonizing mixture of scream and laughter, triggering Winslow to run in terror. A grim representation of the heterosexual male desire turned nightmare. A fantasy twisted into a horrifying rejection with the object of Winslow’s lust laughing at the vulnerable thing he is. And Winslow is particularly vulnerable considering his very name was stolen by a man he allowed to die in an accident he saw and did nothing to prevent. His guilt becomes more and more burdensome as nature’s curse weighs heavier. Later, Winslow submits to his cursed instincts, feverishly masturbating while his fantasies of having sex with the mermaid are engulfed by his unearthed guilt in a primal whirlwind of defeat.

Winslow’s capitalist-centered mindset of attaining the light at the top, perpetuated by his outburst of killing the seagull, triggers his unsavory base impulses. A metaphor for self-defeating feelings so easily provoked within men entangled in a capitalist rat race. A system that rewards indifference toward one another, rather than compassion, in the name of attaining optimal wealth and status. The internal guilt this heartless roadmap to success can evoke is symbolically portrayed with Winslow’s dredged up guilt from allowing a man to literally die for his selfish gain.

Excessive alcohol consumption becomes Winslow’s one way to bond with Wake and escape his contempt, revealing an apt analogy. Men are not commonly expected to share vulnerabilities, and the inherent cutthroat competitive essence of business only accentuates the sentiment. Introduce alcohol and those walls come down. But the nightmare of any career driven male would be to spill his beans to a rival coworker in a drunken state, allowing them to use it against his character, to sabotage his chance at “the light.” When Winslow pours his guilty heart out to Wake in a drunken outpour, Wake’s eerie voice echoes through the walls, Why’d y’spill yer beans? In Winslow’s mind, he’s exposed his weakness and left himself defenseless, conveyed in his fever dream of a nude Wake standing above him and feeding the light’s power into a submitted Winslow’s eyes.

At this point, real or not, Wake has become the personification of Winslow’s internal shame, ridiculing and gas-lighting the feeble Winslow. The way Winslow sees it, he has no choice but to dominate and end this phantom of guilt and humiliation. A sequence of Winslow overpowering Wake, treating him like a dog and burying him metaphorically implies the dominating male ego overtaking and concealing its fragile vulnerabilities, in Winslow’s case, to a point of psychosis. A demented depiction of the male ego’s rejection of its vulnerabilities. This unhinged madness results in Winslow murdering Wake. Now with his projection of self-ridicule removed once and for all, Winslow can climb the stairs to the light, freed from his manifested guilt holding him back. But the light for which he sacrificed his own humanity to obtain devours him, its all consuming power completely undoing him. Just as wake knew, and just as any experienced man at the height of his success can impart, what is supposed to bring boundless satisfaction can instead bring unsatisfying madness if not kept at a measured distance.