Horrific Hidden Meaning is a series that explores how horror movies can provide a platform of discussion for the uncomfortable realities within society and the human psyche.

The year, 2002. The movie, The Ring. This moody, dread-filled story about a videotape that kills its viewer seven days after watching it scared up audiences and immensely influenced the horror genre with its massive popularity. Something about this spooky ghost tale hit audiences in all the right ways. Perhaps, in part because, at its core, The Ring hints at some mortifying personal truths that are even more revolting than the slimy, longhaired phantom that haunts its narrative.

The Ring follows Rachel (Naomi Watts) as she investigates her niece’s death by the cursed videotape. Once Rachel herself watches the tape, a race to reverse the inevitable ensues. At the heart of this plot lies Rachel’s son, Aidan (David Dorfman), who possess a small degree of mediumship. As a result, Aiden is a bit off-putting. His piercing baggy eyes and strangely precise form of speech convey just how left footed in comparison to other children he is.

When Rachel’s ex and Aidan’s father, Noah (Martin Henderson), enters the picture, it’s revealed that he abandoned Aidan and the responsibility of fatherhood. Living on the outskirt of his child’s life, Noah’s fear of raising Aiden got the better of him.

It’s here that the metaphor for the horror of a parent’s neglect toward their child takes form. This theme is brought to the extreme when it’s revealed that Samara (Daveigh Chase), the vengeful spirit behind the videotape, was murdered by her own mother. It turns out Samara, not unlike Aidan, had dark psychic abilities of her own. Unable to control her chaotic mind, Samara drove her parents mad with disturbing imagery until her mother killed her by throwing her down a deep, dark well.

Samara’s infertile mother wanted nothing more than to have a child. But when she adopted Samara, she resented the evil thing she got. Though transmitted through the prism of a ghost story, the true horror here is a parent’s resentment towered the anomalies their child can unexpectedly possess. Society expects a parent to love their child unconditionally, but what happens when displeasure or even animosity occurs in its place? With no outlet to express these unacceptable feelings to the world, much like Samara’s mother, madness can take over with disturbing results.

In addition to a conversation about paternal neglect, The Ring also features a delectable side of techno-horror. When exiled to a tiny barn loft by her father, Samara had nothing but a small television set to occupy her isolation. After her death, Samara’s choice to haunt the world through video is no coincidence. She extends the lack of affection she received from her father by making others feel the cold emptiness she experienced while sitting in front of her TV, cut off from any real human contact.

The thematic sentiment of detachment by way of technology persists throughout the movie. Samara’s father commits suicide by using all the electronics in his household to brutally electrocute himself after realizing there is no end to his daughter’s evil power. Noah is buried in his technology-heavy video journalism job in place of being a reliable father figure in his son’s life. The most striking visual assertions of this theme is when Rachel looks from her balcony to the windows of the apartments just across from hers. She observes multiple units, each exhibiting a lone individual watching television. Of course, the one that catches Rachel’s attention most is that of a child watching cartoons as a worn out, miserable looking single mother steps out for a smoke on her balcony. This brief moment is an apt way of showing both the boxed-in segregation as a result of automation, and Rachel’s inner reflection as a single mother. 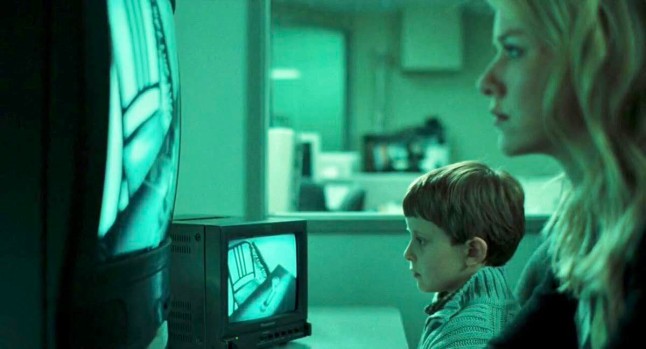 The movie portrays technology, specifically television as a way for people to escape rather than confront their essential human needs. At the climax of the movie, the spirit of Samara manipulates events to make a television set knock Rachel into the deep, dark well at the center of the story. This visual conveys the remote, desolate mentality technology can lay upon the human spirit, sending users down a hopeless pit.

Samara’s hand then grabs Rachel from the trench of the well, transmitting the moment of her death and allowing Rachel to understand Samara’s pain as a living person, experiencing her tragedy first-hand and in her shoes, rather than through images on a TV screen. This, in a sense, is a baptism for Rachel. She is now able to leave the well with an understanding of why Samara’s spirit lingers. With this, the movie conveys that knowledge by way of human contact is far more powerful than through the barrier of technology.

Rachel’s revelation is a turning point for Noah as well. Learning that Samara was a child who only wanted to be heard opens his eyes to his child who’s been left in a dark hole of his own without a father in his life.

Noah’s revelation, however, is short lived. Just when the movie takes a stance on human compassion as the ultimate deterrent to technological solitude, Samara’s spirit arrives with a vengeance and kills Noah. There was never an empathetic cure to Samara’s curse as Rachel comes to realize that the only way to avoid Samara’s wrath is by copying and showing her grim videotape to the next person. Here, the movie delivers its final nihilistic stance, that technological advancement is far more forward moving and expansive than human sentiment can ever be. In the end, just like Samara’s curse, technology will win, until its detached nature has fully consumed the world.

In the final scene, Rachel assists her son in making a copy of the videotape in order to lift the curse from him before his seven days are up. Little Aiden asks Rachel who they will show the tape to next. The last shot rests on the image of the well from the video. In a meta-sense, the audience viewing The Ring is next. In showing up to watch this escapist horror movie, the audience is themselves complicit in technology’s ever-evolving grasp on the collective human conscious, and aiding its expansion with their support.