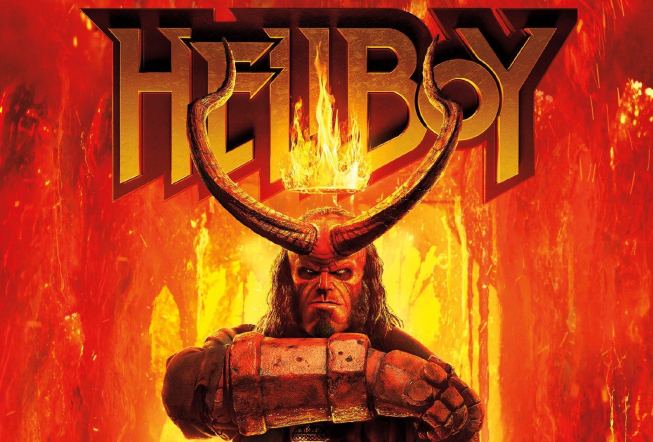 Guillermo del Toro’s Hellboy (2004) and Hellboy 2: The Golden Army (2008) are widely celebrated by fans of Mike Mignola’s comic book series as definitive film adaptations. Comparatively, director Neil Marshall’s 2019 reboot was not as critically embraced. Even so, Hellboy (2019) holds its own value as a rebuttal to del Toro’s more earnest vision by turning its speakers to ten and blaring a metal fueled, blood-soaked monster movie.

Experienced as a genre filmmaker, most notably from his horror masterpiece, The Descent (2005), Marshall accepted the reigns to Hellboy only after insisting it be a clean reboot with no ties to del Toro’s work. He was inspired by the gothic-horror art from the comics and wanted to bring his vision to life with a hard R rating, unlike the two previous PG-13 films. Casting David Harbour in the titular roll was the next essential ingredient in giving the franchise its brash makeover.

While the core plot draws mainly from The Wild Hunt storyline from the comics, Marshal chose not to tether himself to this one specific narrative by also stitching in various short stories from Mignola’s vast world. This allowed for a very kinetic tone, jumping from one eerie setting to the next. From the grotesque Baba Yaga’s disturbing child-torture lair to a comedic flashback where Hellboy investigates a baby’s kidnapping by fairy. Marshal truly captured the Paranormal Investigator side that had yet to be as fully realized on film. He also made use of an array of practical effects mixed with digital, thanks to academy award winning makeup artist Joel Harlow, granting the creatures a legitimately disturbing and unforgettable tangibility.

The introduction of our hero finds Hellboy investigating the disappearance of missing fellow B.P.R.D. agent and good friend, Esteban Ruiz (Mario de la Rosa), who has been transformed into a vampire. Here, the movie makes its first loud statement that it is not to be taken seriously by pitting Hellboy against Ruiz in a Mexican wrestling match. Hoping to save Ruiz, Hellboy’s brute strength gets his good friend gruesomely killed instead. This inciting incident leads Hellboy to contemplate the undeniable monster within himself.

Hellboy’s mentor and father figure, Professor Broom, keeps him tethered to his morality. But after a betrayal from allies in the Osiris Club and revelation of his destiny to bring about the apocalypse, Hellboy wonders if his humanity is even worth keeping. Enter the newly resurrected Nimue, The Blood Queen (Milla Jovovich), who extends her hand to Hellboy to embrace their destiny together as king and queen of the apocalypse.

The third act battle is what makes this movie an all-timer in extreme monster mayhem. At this point, the stage is set between hero and villain. The Blood Queen and Hellboy both represent the outcasts of society, the former choosing revenge on the world with a gnarly, skin boiling plague and the ladder reluctantly showing up to fight for those that reject him for his devilish lineage.

Here, Hellboy and reluctant ally, agent Ben Daimio, must embrace the inner monsters they hate and fear within themselves to take on The Blood Queen and her henchman, Gruagach. Daimio, after spending the bulk of the story untrusting of the feral beast lying dormant within Hellboy, reveals a suppressed animal of his own. His distain toward Hellboy, it turns out, was a projection of his own self-loathing. In a pivotal moment of combat between Hellboy and a hulking Gruagach, Daimio transforms into savage jaguar, turning the tide of the battle with glorious ferocity. A primal surge of superhero team-up time can be felt as Hellboy and Daimio battle Gruagach together.

Daimio is eventually knocked out of the fight and it is now Hellboy’s turn to embrace the monster within. Defeated and brought to a checkmate after The Blood Queen kills his father figure and moral compass, Professor Broom, right before his eyes, Hellboy is left with no choice but to accept his destiny as king of the apocalypse by wielding King Arthur’s sword (yes, that King Arthur) and becoming fully possessed as a brutish, raging demon. Metaphorically, this beast within that Hellboy dreads is the primal, egocentric animal at the base core of all rational human beings.

Once Hellboy bears the sword, he assumes an even more devilish form. His muscles and stature protruding, horns full length and the suppressed fire within now ignited outward, engulfing his skin. A flaming crown above his head adds a clever touch of self-superiority. At the same time, as if to reflect Hellboy’s abandonment of empathy toward the human race, hell literally arrives on earth as a bloodbath of havoc and destruction unfolds across London. People are squashed, torn and mutilated as demon hordes from hell make earth their playground.

Just in the knick of time, Alice, Hellboy’s trusty medium friend, manages to summon the spirit of Professor Broom, who appeals to Hellboy’s better nature within. Now equipped with both monstrous strength and a renewed moral worth, Hellboy beheads The Blood Queen and sends her straight to hell. The final scene features Alice, Daimio and Hellboy raiding an evil cult as a fully functioning strike unit. The most colorful and entertaining action sequence in the movie ensues, reflecting a sense of freedom from the inner monsters that no longer burden them.