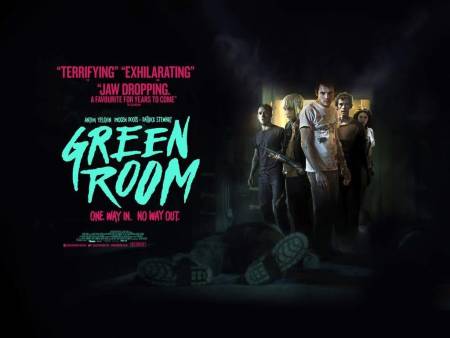 For the past five years, the indie film company A24 has released some deeply memorable gems, particularly in the horror and thriller category. The majority of these more genre centric releases, like Ex Machina, The Witch and most recently, Hereditary have leaned heavily into elements of supernatural and science fiction. Green Room, A24’s 2016 horror thriller from director Jeremy Saulnier, stands out as a haunting vision of events that feel unfathomably real. No ghosts, no futuristic robots, Green Room introduces us to horrific consequences stemming from an all too real situation.

At the start of the movie, Green Room emphasizes music and the sublime feeling it can bring a crowd of people when it is shared and experienced live. The movie makes a point of communicating that there is a primal force in music that can turn a crowd of completely different people in every way into a singular entity. Music is a great uniter, it has no bias of race or background, it simply coalesces people with its sound and erases all differences in its brief, but intimate duration. There is a certain equalizing ‘truth’ that can be reached with music. And as the movie continues, we come to realize that human beings can reach a similar primal ‘truth’ when faced with the threat of impending death.

The movie opens and we are introduced to our main cast of characters, a band called the Ain’t Rights. Almost completely broke, they live life on the outskirts of the music world, chasing the brief ‘high’ they feel from playing niche venues with small, intimate crowds. They dare not sell themselves out to a record label. That would distract from the exalted pleasure of playing solely for the music, for the divine moment. This is comically portrayed in an early scene where the band plays their hardcore punk music to a quiet, confused crowd in a diner. The lead singer bellows the lyrics, “I was broke. I ask myself what have I become!” Living day-to-day, practically homeless is fine for this band, as long as they can vent their frustrations through their art and feel truly alive and genuine while performing.

The band eventually makes it to a gig at a neo-Nazi bar in the woods outside of Portland Oregon. The camera continually emphasizes the lush, green forest, as if to communicate the characters’ deeper dive into a jungle of primordial survival, outside the protection of socialization. Here they will be left to their instincts. But first they will play one last set for their near-future captors. We get a beautifully filmed moment. The band captivates the crowd of skinheads, granting them Godhood as they all lose themselves to a mosh of movement. The camera shoots this action from ground level with an almost heavenly high-pitched ringing sound, displaying the sanctity felt by the individuals of this jumbled horde.

When the band mistakenly walks in on a murder after the show, the neo-Nazis hold them against their will. Witnesses cannot be tolerated. From this point on, the fierce tension never lets up. A rollercoaster ride of survival ensues as the movie forces you into the shoes of this band, constantly questioning how you would react in such an overwhelming situation.

Of course, the devastating reality the movie taints us with is due largely to its brilliant cast. Anton Yelchin plays the lead character, Pat, with an infectious vulnerability. Imogen Poots plays Amber, an outsider thrust into the ugly scenario, stealing scenes with an unexpectedly dry acceptance of her fate.

The true showstopper however is Patrick Steward’s Darcy as the leader of the skinheads. Steward is often known for his roles in Star Trek and X-men as the wise harbinger of hope and reason. Here he taps into a deep, unrecognizable darkness. This affective performance is accompanied by Saulnier’s restraint as a director, at times keeping the actor masked in shadow or completely out of frame. A clever choice that emphasizes the mystery of a man who conveys no emotion while coordinating the slaughter of innocent kids, while also exhibiting a kind of paternal pride for his most loyal and trusted men working under him.

At one point, the main character, Pat, describes the transcendent nature of music, saying, “You gotta be there… It’s shared live, and then it’s over.” While these words have great thematic significance, there is also a meta interpretation. Much like experiencing music live or being thrust into a life or death situation, watching an effective horror or thriller, like Green Room, can inflict a sublime reaction. There is no formation of words that can describe the sensation of being swept away by an expertly showcased moment of horror. This is even truer when experiencing a thrilling movie with a theater audience. You enter this gathering with strangers, but for that brief time you are all the same as the innate sensation of human fear penetrates everyone in the room.

Green Room does a superb job of subjugating its audience to its brutal reality. Similar to experiencing live music, this movie will force you into the present, digging deep at primal sensations that exist within us all. And when the credits roll and you make it out the other side, you just may feel a little more alive for having experienced it.